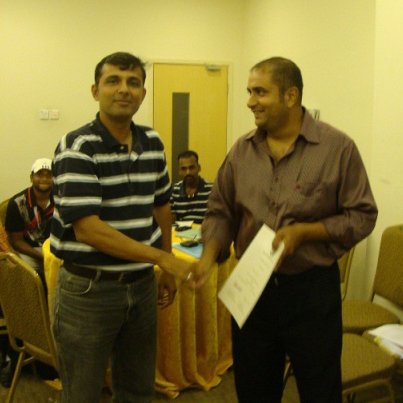 The inaugural SCA (Singapore Cricket Association) tournament that was held here in Singapore from the 3rd to 5th July, 2012 can be considered a huge success. Five teams, Cricket without Borders (Australia), Hong Kong, Japan, Singapore and Thailand took part. Even the rain could not put a dampener on the proceedings though it did try a few times. In fact the rain, made it possible for the players to achieve even better comradery and bonding within teams and with other teams whilst waiting for the games to start. The cricket played was at a high standard and it was heartening to see a wide range of players from different countries, cultures and ages all united under the love of a game of cricket.

The tournament started on the 3rd of July, each team was supposed to meet each other with a 3rd /4th placing Match and the Finals to be held on the 5th afternoon. Unfortunately even the best planning in the world could not have predicted the amount of rain that would suddenly hit Singapore during the week of the tournament. Credos to the organisers who managed to rearrange the events so at least everyone got to play three matches even if not the full 20 over innings. There was even a bowl out amongst two of the teams. Although the points where shared in the end, Thailand and CWB went to the centre of a muddy pitch and provided a thrilling spectacle for their supporters and other teams with a bowl out that CWB eventually won. Rain prevented the possibility of a 3rd and 4th placing match but Thailand met Japan in the finals and after an exciting game they went on to become the first winners of the International Women’s T-20 Challenge.

Enthusiasm, excitement and enjoyment took precedence over the whole tournament and it was evident in the dinner held at the SCA ground. All the teams were encouraged to mix around by the organisers and get to know players from other countries. It was a wonderful sight to see that language was not a barrier.

Congratulations to Thailand, the winner of the Tournament, however, each team could be considered a winner and hence the success of the tournament. Each player was given a chance to play against teams that they might not have played and this benefits them, their teams and cricket as a whole. Let us hope this is the start of many more such tournaments held for Women in this region.
Singapore Women’s Cricket from a player’s perspective: Angela Moghe

Women’s cricket has certainly come a long way in the last few years. Since I have started playing cricket here in Singapore the changes that have taken place have been tremendous.

A cricket clinic held by Charlotte Anneveld from 9th to 13th December, last year, set a solid foundation for us to start this year off to a flying start.

The Women’s league is back stronger and better. From 3 teams last year, 4 teams are now playing in a league made up of women of all ages. All the teams are again named after semi-precious stones. The first match was not played due to rain, but last weekend the match between Ruby and Emerald took place. Amongst other things it gave the girls match practice and team work, was evident throughout. Although one team went on to win the fun and enjoyment seen by all meant all went home winners.

As well as the women’s league, the women have now also joined the Griffin Kinetic League in Division 6. Although a full ladies team has not been played as yet, due to several factors, a number of women have benefited from playing against the men and with the teenage boys who have helped make up the team. The support and encouragement from the men as been great and a lot can be learnt from each game.

The match practice, training and support is now all coming together for women’s cricket and I cheer for a successful year here in Singapore.
Training session with Charlotte: Tanya Sen

Former Australian National cricketer, Charlotte Anneveld, held an eye-opening training session with the Singapore National Women’s Cricket team and under-14 boys team in a bid to increase the level of play and participation in women’s cricket in Singapore. She gave a number of beneficial tips and strategies and taught each player how to intelligently achieve the goals set in a game of cricket.

Charlotte assigned each player tasks according to their strengths and capabilities. She explained how confidence and a good mind set are the key weapons for any sports person. There was a positive and immediate change felt by the players.

“It is truly inspiring to have someone who has played at the highest level of the game impart her wisdom to us. I can feel that my game has gone up a notch,” said Tanya Sen, a bowler in the Singapore squad. “We hope she comes back again for another awesome session.”
SCA Women’s League 2011: Angela Moghe

The first match of the inaugural Women’s League got under way on Saturday 16th April, 2011 at the Kallang Cricket Stadium.

The league consists of three teams including two women’s teams and one boy’s team. The boys team named The Rubies, met The Diamonds which is captained by young Vritti Sethi, for the first match. It was a well-played game with several close shaves but the boys proved their mettle and went on to win the match. The Player of the Match award went to a member of The Rubies, Janak Prakash, for taking 4 wickets. The team work amongst the ladies was evident throughout the game and this holds well for the future of women’s cricket here in Singapore.

The League will be played over the next few weeks with the final match to be played on 14th May, 2011. The event was graced by Mr Syed M H Kirmani, a member of the 1983 India World Cup winning team and a world-class wicket-keeper. At the end of the match, Mr Kirmani shared his vast experience, gave advice and encouraged all the players.